We all want to save money and time, and having to replace or repair a laptop sooner than we wish is a waste of both.  Just like maintaining a car will prevent costly repairs in the future, the same can be true of your laptop.  While some of these suggestions seem like no-brainers, some are easily overlooked and we thought worth mentioning.

Use Care when Handling Your Laptop

We see a lot of broken screens and cracked cases from laptops being stepped on while placed on the floor or from falling off edges of beds and sofas.  And drink spills, we see so many sticky and wet keyboards!  (Wine is much kinder than orange juice or other sweet drinks)  We also see a lot of broken DC jacks from laptops riding along in a backpack with the cord still plugged in.  These are all things that happen so quickly and are so easy to forget, but also so easy to prevent.  Be careful not to leave your laptop sitting on the floor unattended, or left on the edge of a bed or sofa.  Make sure to unplug your power cord and any plugins that stick out before transporting.  And maybe have your snack before computing, or at least don’t sit your drink too close.

Always make sure you keep your antivirus up to date, never let it lapse.  Even just a short gap in coverage can let in all sorts of damaging bugs.

Dimming your screen, tweaking your power settings to use less, and closing out unused applications can help lessen the amount of power used at a sitting.  Lithium Ion batteries no longer have to be completely discharged to retain performance, but unplugging and actually using the battery will help prolong it’s life.  Solid-state drives are also less taxing (not to mention much faster!) on a battery than the traditional hard drive.

It’s tempting to use your laptop on your lap when you’re all snuggled in under a blanket, but make sure there is a hard surface between laptop and plush surfaces to allow for airflow.  Remember those travel desks for coloring and drawing in the car on long trips?  Those are quite useful to prevent overheating.  Periodically, have your laptop cleaned out to prevent dust and fibers from building up inside and from binding up fans.  Static and air movement from the fan pulls in all sorts of dust and grime, it’s always surprising how grungy they get!

I think most are guilty of this, snoozing an update and then forgetting to let it run.  Updates really do keep your laptop running like it should though, so make sure you allow it to update as needed.  Also, shutting your laptop down occasionally, rather than just closing the lid will help as well.

Of course, when disaster strikes, we are here to help!  And if you do need a new laptop, did we mention we sell some very nice, economical refurbished laptops?  Give us a call!

Solid State Drives are all the rage now, and it’s no wonder why.  Solid State Drives (SSDs) use flash memory versus moving parts and platters like traditional Hard Disk Drives (HDDs).  Not convinced and wondering why you would even need one?  We’ve got it covered…

1.  SPEED.  Since solid state drives don’t have moving platters, it’s much easier and faster to search for information.  Your system and it’s programs boot almost immediately.

2.  DURABILITY.  HDDs have moving parts.  If thrown around, jostled or dropped, mechanical damage and data loss is likely.  Since SSDs have no moving parts, they are much more reliable.  Your data can be stored safely for years, as shock and movement don’t affect SSDs.  HDDs have a life expectancy of three to five years, although even if brand new, you should always make sure to back up your data on something else for safe keeping.  SSDs have a life expectancy of up to three times longer, with manufacturer claims of them lasting to 1-2 million hours.

3.  EFFICIENT MULTITASKING.  Run multiple programs without stalling or waiting.  No more will your antivirus scan slow you down while you download or work on other programs.

5.  COOLER.  SSDs operate with cooler temperatures than that of HDDs, keeping your laptop cooler (and your lap!).

6.  QUIETER.  Since SSDs run cooler, the fan doesn’t have to work so hard, making a noticeable difference in noise.

7.  FLEXIBILITY.  Some SSDs can be plugged directly into your motherboard, allowing it to work alongside your hard drive or be used as a cache drive.

8.  GAMING.  Spend more time playing and less time waiting, with faster load times.  Gamers love SSDs, as it puts them a step ahead of their HDD using competitors .

9.  SIZE.  A physically smaller size SSD holds more than an HDD, allowing for smaller and more lightweight than ever laptops and electronics.

10.  COST EFFECTIVE.  SSDs may still be a little more costly than HDDs, but the price has really come down.  The gains made in durability, reliability, and speed far exceed the small cost difference. 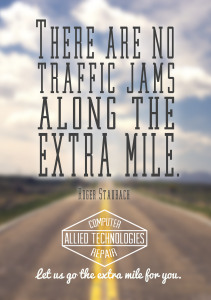 With shops in Fayetteville and now Bentonville, we’ve been serving customers in the Northwest Arkansas area for over twelve years.  We pride ourselves in providing friendly, affordable, and prompt computer and printer repair to both home users, offices, and clinics.  Our goal is not only to solve your computer issues, but to provide excellent customer service and support.  We know that a satisfied customer will come back again for help with future issues and we are thankful for our long list of loyal customers.  We always offer a free diagnosis for in-shop computer repairs, there is never a charge if you don’t want to repair it.  We stand behind our work, with a 30 day warranty on all in-shop labor.  Call us today, let us help you!

We offer the following services: